Comic Builder is a competitive card game where each player is trying to construct their own comic from the bottom up and make a story that is heroic while at the same time playing cards on their opponent that make their comic book hero looks incompetent.

This game can be played between 2-4 people

First each player must be receive two advertisement cards and one cover card. After that, the rest of the cards (not including any extra cover and advertisement cards) are placed in a deck in the middle of the circle of players. Players each draw 5 cards. The player with the longest last name starts the game.

On a players turn you can play 2 cards. Every player is trying to make a comic book. A comic book is comprised of stacking cards from the end of the comic all the way up to the cover. You can either play both your cards on your comic book, on someone else's, or one can play a card on yours as well as the another players comic book. If you choose you can also play only one card, or no cards at all.

The most common type of card is a +1 or -1 card. Playing one of these simply increases/decreases your score by one. However, most cards have a color (red, yellow, blue, green), and when you play a card on top of another card of a matching color, that top card is now worth the number of cards of the same color beneath it plus it's self. If it is a negative card on top, then you do the same thing and the resulting number is a negative.

There are some special cards. The grappling hook when played changed the rotation of the game. The hero mobile skips the next person in the rotation. The sidekick lets you take a card from another players hand. You pick blindly but you may choose what player you steal from. And the hero signal, once played, lets you take a card from the top of another players comic. For all these cards, you may choose to activate their ability or not. Ontop of their ability, that also count as a +1 card.

Another type of card is called an Editors Note. These cards (despite being colored) are colorless and can be played at any time on anyones turn. You place this card on top of any comic book and it cancels out the card directly below it. Editors notes can be taken by Hero signals and can be canceled out by other editors notes.

Lastly there are the advertisements and the cover. An advertisement can be played in addition to the two cards in a players turn, and they lock in all the cards you have played. Once an Ad is down all the card below it are preserved and the points are unaffected. However Ads can be taken by a hero signal and they can be erased by an editors note. They do not insure safety. A cover however is immune to those things. Like an Ad you can play it in addition to your two cards. However once the cover is down, you are officially out of the game and however many points you have are final. You do not have to play your ads before you play your cover.

At the end of a turn a player draws from the pile until they have 5. If a player starts a round with less than 5 cards then it sucks to be them. You must play your round with the number of cards you have in your hand and then once you re done you can draw back to 5.

The game is over once everyone has played a cover or there are no more cards to play.

Tally up your points and the player with the most wins.

Cut out all the cards. Throw out the blank ones. Rangle up some friends, and have a good time you nerd! 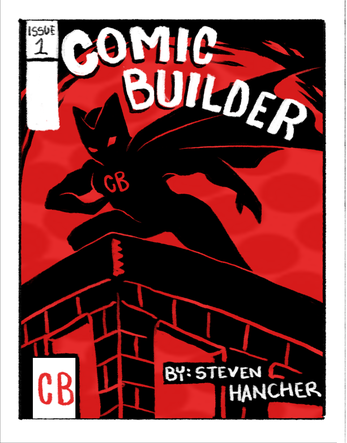